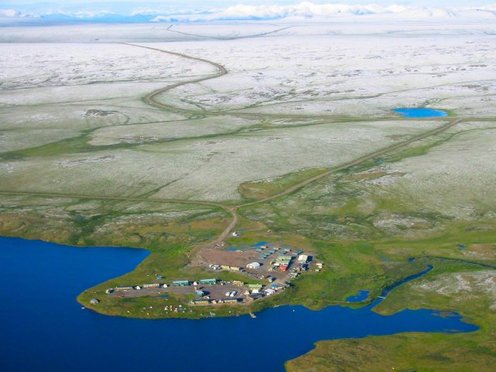 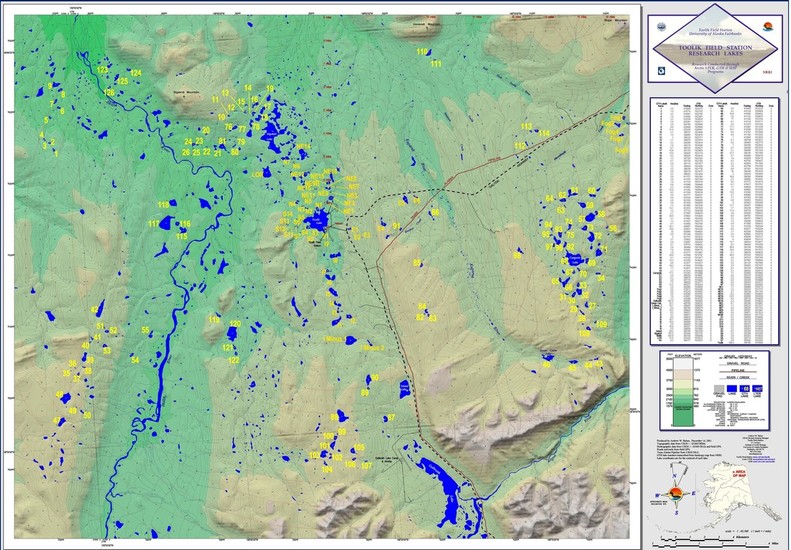 Above: Maps of Alaska (top) and Toolik Field Station Research Lakes (bottom). Fog lakes (upper right corner) are the focus lakes for this warming project​.
Overview:
This research will consist of a multi-year, whole lake warming manipulation (initiated during July 2017) to quantify the effects of future climate change on Arctic lake ecosystems, an area that is particularly vulnerable under a changing climate. In addition, regional climate and lake models will be coupled with measured responses of the field manipulations to better understand the sensitivity of lakes (locally and regionally) to changing climatic conditions. Response variables of interest include spatial and temporal variation in physical (temperature, mixing, ice coverage), chemical (nutrients and cations), and biotic (microbes, algae, zooplankton, fish) components and their interactions.

Organisms that inhabit Arctic regions are extremely cold-adapted and also adapted to deal with very short growing seasons (i.e., ice-off periods are typically only a few months out of the year) in which they must perform the majority of their feeding (energetic requirements), growth, development, and reproduction. Therefore, organisms in the Arctic may be particularly sensitive/responsive to small increases in temperature and the duration of the growing season due to climatic warming, making this research all that more appealing.

Goals:
The goals of this project are to: 1) measure the effects of longer and warmer growing seasons on whole lake ecosystem production and community composition, from microbes to fish; 2) predict arctic lake temperatures with a coupled, lake-climate model. The model will use historical climate data and climate projections, as well as the results from the lake manipulation to integrate physical, climate, and biological responses for surrounding lakes ranging in volume and depth.

General approaches and questions to address:
Routine lake sampling of our study lakes has been a part of the ARC-LTER standard sampling for many years, however with this project we plan to increase the intensity and resolution of this sampling. Primary parameters collected (typically from various depths) include dissolved oxygen, temperature (continuously logged), conductivity, light, chlorophyll, lake water chemistry (nutrients, cations, and anions), phytoplankton and zooplankton communities, DNA samples, pelagic primary production, sediment analysis, and of course fish communities (species, size, diet, age, genetics, morphology). In addition, by using temporal oxygen dynamics obtained by our fine-resolution loggers we plan to gauge the effects of our manipulations on whole ecosystem productivity (gross primary production and ecosystem respiration).

​Comparisons between manipulated (Fogs 1 & 5) and un-manpulated (Fogs 2 & 3) lakes will allow us to investigate the response of various physical, chemical, and biotic components. Our team will also utilize the long-term dataset available through the LTER site.

Our goal is to warm the manipulated lakes by at least 4°C and delay the date of ice-on (i.e., extend the growing season) by ~30 days beyond the average ice-on date. We will achieve these goals by using large (BTU) heat pumps designed for large swimming pools. These will be powered by two propane powered mobile generators. We will also use a SolarBee® (www.medoraco.com/equipment/sb-series-solar-powered-mixers) unit on the larger of the two manipulated lakes (Fog 1) in order to adequately mix the warmed water with the entire upper level (epilimnion) of the water column.

In summary, we will address the questions listed below with a combination of experimental lake manipulations, response monitoring across trophic levels (microbes to fish), and coupled production, bioenergetic and climate models. We will also take advantage of the extensive limnological and fish database accumulated by the ARC LTER program to: 1) quantify and understand inter-annual variability over longer time series, 2) calibrate our lake and climate models, and 3) scale-up to predict a regional response to lake climate warming.

To guide us in accomplishing our research goals, we have outlined specific questions that we aim to address:
1) How will lake ice coverage and annual thermal regime be altered by warmer lake temperatures and an extended ice-off (i.e. growing) season?
Using our deployed high-resolution temperature loggers, we will closely track temporal dynamics of the thermal regime (e.g., temperature, structure, mixing) throughout the water column. We will also use our field cameras deployed at each lake, recording hourly photos, to track ice coverage of the lakes (i.e., ice-on and ice-off).
​
2) How will (lower trophic levels) (i) primary (algae) production, respiration and community composition, (ii) bacterial production, respiration, and diversity, and (iii) secondary (zooplankton; macro-invertebrates) production, respiration, and community composition be affected by warmer lake temperatures and an extended growing season?
We plan to regularly sample for these parameters listed above numerous times throughout the growing season to track changes overtime. We will also compare these values to the reference lakes and previous years of data in the ARC-LTER dataset.

3) How will fish production (e.g., growth and survival), condition, population structure and dynamics be affected by warmer temperatures and altered rates of secondary production resulting from the effects of climate change?
Fish will be sampled (and have been for many years) throughout the year using ice-fishing, hook-and-line, and gillnetting techniques to evaluate species and size distribution, growth, and diet. All newly captured fish are tagged using PIT tags (www.biomark.com), while captured fish that already have PIT tags (i.e., recaps!) have their unique tag numbers recorded. This tagging allows us to track these individual fish overtime and scale up to population-level demographics. Genetic and isotope (diet) samples are also taken from each fish captured. The fish in Fog lakes include Arctic Char (Salvelinus alpinus) and Slimy Sculpin (Cottus cognatus).

4) Do extended growing season impacts carry over to the next growing season and cause longer-term changes in fish production and population structure?
Inter-annual carry-over and temporal dynamics at all trophic levels will be assessed by comparison among years and seasons using data collected during this experiment and the ARC-LTER dataset.

5) Do individual arctic lake thermodynamics respond differentially to climate warming at the regional scale?
Using a mesoscale lake temperature model that we develop, we will estimate lake thermodynamics at the regional scale across the full range of lake types (surface area, depth, etc.). This will be done using output from the coupled lake-climate model, while-lake manipulation data, and historical LTER datasets.

6) Do fish populations in individual arctic lakes respond differently to climate warming at the regional scale?
We will simulate and predict fish responses (metabolic and population-level) at the regional scale using the climate-driven lake temperature model for temperature inputs and a long-term fish size and growth dataset for change in mass inputs into a bioenergetics model. We will then build upon a matrix model based primarily on the empirical field data and allow us to evaluate the population-level effects of simulated climate change. This modeling approach will allow us to draw inferences beyond the scope of the whole-lake manipulations.